When she put on her NuEyes glasses, Brazil resident Judy Jordan was able for the first time to see a group of friends who helped raise funds to purchase the glasses. Logan Smith, of Vision Aid Systems Inc., demonstrates with a video monitor how Jordan, legally blind since birth, could see with the new technology.
Ivy Jacobs photo

A local woman recently experienced the dream of a lifetime and can now see what the world really looks like for the first time.

Brazil resident Judy Jordan, 64, was diagnosed legally blind at birth due to a congenital disorder known as Albinism. All her life Jordan has wondered what the surroundings of her life looked like, but knew she never would be able to see.

“I get too much light in my eyes to see properly,” she explained her 20/300 eyesight while nervously waiting at the American Legion Post 2 Friday morning for the delivery of her NuEyes. “I can see some things if it’s right up next to my face, but that’s not that good.”

“The technology is incredible,” Jordan said as tears streamed down her cheeks while waiting. “I saw it at a conference on low vision and couldn’t believe it. It was a dream come true.”

NuEyes went on sale to the public in April. Logan Smith, of Vision Aid Systems Inc. in Greenwood, Ind., delivered a pair of the blacked-out glasses that will act as Jordan’s new eyes.

“The unit uses a combination of custom Andriod software and smart glasses that has a built-in camera that captures images and projects them on the lenses,” Smith explained. “The technology is similar to the cameras and computer programing used in military drones.”

The lightweight device also has voice activation, a wireless Bluetooth controller, up to 12-times magnification, supports wireless internet capabilities and has the potential to stream movies and TV. It even includes a built-in light for better reading and is updating everyday to become better.

It is inspiring technology, and, for those who helped Jordan get it, a well-deserved payback for years of hard work and self sacrifice.

“She’s all about doing for veterans, doing volunteer work,” Post Commander Randy Kaelber said. “It’s Judy who comes up with our fundraising project ideas. She works with children in the flag-folding presentations. It’s Judy who finds something if it’s missing or if something needs to be done. Judy is extremely valuable to all of us, and we wanted to give back to her.”

Jordan is also an officer and does the treasury books for the VFW Ladies Auxiliary.

“No one does as much as Judy does for our organizations,” said Commander of the Sons of American Legion Garry Miller about why the veterans’ groups worked together to raise $5,995 to pay for the “special glasses for a special lady.”

As for Jordan, she’s a strong woman who is so self-reliant she learned how to ride a moped to get around her hometown Brazil on her own.

“When I was a kid I thought everyone saw like I did. I thought I was normal, whatever that is,” said Jordan, who never considered herself disabled. “I’ve been this way all my life. Being blind has never been a problem I couldn’t overcome.”

Although Jordan went to a school for blind children, it was hard being a shy child.

“Kids can be brutal,” she said about the bullying and teasing she endured during her formative years for not only being blind, but looking different. “I was very shy — I know people don’t believe that now — but I was. It was tough, but I didn’t allow it to bring me down. I’ve always wanted to give back to others, to help people who need help.”

The challenges she faced made her stronger. Jordan said the second chance at life she got while going to school allowed her appreciate the good around her, it made her self-reliant.

“When things are hard I think to myself, ‘That’s life, that’s how it is and you put on your big girl pants and keep going,’” she said. “And I do. I’ve always tried to stay on the positive side of life.”

Jordan has worked as a physical therapist, been an aide and a teacher, provided support to others experiencing low-vision problems while she and her husband Gary and raising a child.

“I’ve seen my husband for 46 years, but I’ve never really seen him before,” she laughed. “I’ve never been that way with people. I go for the heart with everything. Love is blind.”

Gary just smiled at his wife’s sense of humor.

“She deserves this so much,” he said, struggling with his own emotions while watching his wife learning how to operate the glasses. “Don’t tell her she can’t do (something) because she’ll prove you wrong every time.”

Once the NuEyes were in place and Jordan could see, a TV monitor set up by Smith allowed a small crowd of people to watch her experience the beauty of sight for the first time in her life. She graciously encouraged others to try on her new eyes, so they could see and experience the gift they gave her for themselves.

“This is an opportunity at a new life for me,” said Jordan. “It’s a third chance at life for me, and how many people get to have that opportunity, that gift? I’m so grateful. This is something I never thought would happen to me.”

What will be Jordan’s first viewing experience be with her new eyes — a simple pleasure that is all her own.

“I can’t wait to go home and watch the birds and squirrels in the trees,” she said. “My husband has told me for years they’re up there. Now I get to see them.”

Contact New England Low Vision and Blindness to learn more about this and other helpful products – we are here to help you find the right solution – info@nelowvision.com or call 888-211-6933. 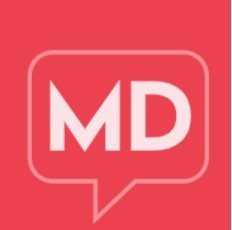 Life After an AMD Diagnosis 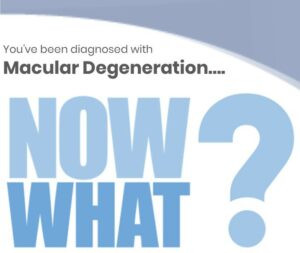 Things to Consider When Newly Diagnosed

Before you leave. Get our FREE low vision guide.

Get the Free low vision guide!