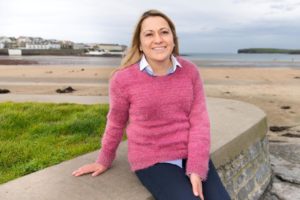 Aine Mae O'Mahony was forced to give up the cafe she ran in Co Clare after losing her sight but is now following her dreams of working in radio.

After going blind at just 25 from glaucoma brought on by diabetic retinopathy, Áine Mae O'Mahony, now 34, says she may have lost her sight, but she never gave up on her dreams. The cafe owner-turned radio station manager tells how she came out of the darkness.

She was happy, successful, independent, and why wouldn't she be? Still in her mid-20s, She owned a thriving business, and had her whole life ahead of her.

One morning she noticed a tiny speck of darkness in her right eye.

Within a year she was blind.

She'd had some experience of illness - from the age of eight, the young businesswoman had had diabetes type one and had learned to manage the condition.

In the spring of 2006, when the then-24-year-old café owner from the Co Clare seaside resort of Lahinch, Ireland noticed a tiny dark blot on her vision, she never dreamed what it would lead to.

"It was a sort of dark spot in my vision, but when I looked in the mirror there was nothing to be seen. I went to the optician to get my eyes checked. He took a picture of the back of the eye and said blood vessels at the back of my eye had ruptured.

"He explained that the dot I was seeing was actually a speck of blood."

Áine Mae was told that she would require laser surgery to combat the growth of the blood vessels in the back of the eye. These blood vessels, it was explained to her, were increasing in size as a result of glaucoma - a side-effect of diabetes.

"Although my eyes had been tested on many occasions, there was no diabetic screening when I was younger."